As I look at the above snapshot I am simply amazed that it came to this.  Back in October I had visited Thermopolis with a number of friends to gather at what has become more or less an annual event.  There, a plan had been hatched by a contingent of the group to meet in Utah later in the Fall.  Those plans had been squelched by wintry weather that made travel fraught with peril and new plans were subsequently put in place to meet in March.  Knowing this, I had begun making plans in early January – putting my relevant shifts up for coverage, making reservations at the dog ranch, looking over maps drooling at topography – and yet this Fifth day of March found me pushing seventy-five miles an hour eastbound on Interstate 70.  That is, away from Utah rather than towards it.

Two weeks or so before my trip to Utah was to commence I came to a hasty decision to abandon that trip and instead visit first Browns Park National Wildlife Refuge and then Yellowstone National Park.  The initial events that set this change of plans in motion I wrote about in a blog that I posted on March 01, 2020.  There I interspersed my skiing tale from March 04, 2019 with the first set of influences that suddenly rekindled my interest in wolves.  At the time the events described in that post were contemporary, my plans were to go to Utah and enjoy the mild Winter climate.  In most ways the passion that I had had for wolves was naught but a heap of burnt cinders reduced to ash.  That an buried ember remained I knew and realized but never fed with new fuel.  I could never completely abandon my interest, but I also purposefully kept wolves (in this sense, by “wolves” I mean the world of wolves) at bay as a secondary or tertiary subject.  Get on with life, you could say.

The Wednesday before I was to depart found me finishing a shift at the Brick Oven Pizzeria in Crested Butte, the place of employment for me over most of the last decade and a half.  When my replacement arrived, that is the shift leader for the night shift, I asked Evan if I could go and when he said yes I beat feet out the door and down the road to home.  I immediately began packing and organizing for the next day’s expedition.  Of course, I took Draco and Leah out for their evening dog adventure.  My mind was abuzz with issues and perspectives on wolves and I had to focus my energy on my canine charges.  I find that dogs can be perceptive to mood and if not careful my emotions can cause the pups distress.  I wouldn’t want them to think that I somehow was disinterested in their well-being due to my reinvigorated interest in their wild cousins.

For the last two to three decades various attempts have been made to restore a viable wolf population in the state of Colorado.  There are diverse interests opposed to this idea.  Recently, proponents of wolf restoration became fed up with the stalling tactics of a state government beholden to special interests.  Taking the matter into their own hands, they put the issue onto the Fall ballot as have many other citizens done for other various causes.  Initiative 107 is just one more example of what happens when the citizens of a state feel that a cause has been unjustly ignored by their state representatives.  Thus somewhat suddenly the issue of wolves was thrust upon me when the political situation found its way to the Gunnison Country.

Thursday morning, March Fifth of this year, found me worried about all the usual odds and ends that proceed a major trip.  Shopping for groceries, paying bills, setting up the house for Winter weather while I was gone, a last visit to the gym – these all occupied my mind in the morning.  I drove the shepherds to Oh-Be-Dogful (a play on Oh-Be-Joyful Creek, a locally well known destination for mountain escapades) pet ranch and returned to Gunnison to finish packing and organizing for my trip.  I don’t like to pack the car while the dogs are around because they assume that they are included.  I’d feel like I was tricking them, and now with the shepherds safely ensconced I could focus entirely at the task at hand.  Doors open, gates open, I concentrated on making this trip right without having to worry  about the dogs thinking they were coming along.

I had had my say in the local paper and had addressed my local political body, taking it upon myself as a sort of patriotic duty to let my elected representatives know what was on my mind.  About the same time I finally received notice from the library that Rick McIntyre’s new book The Rise of Wolf 8 had arrived.  To say that Rick McIntyre is a unique individual barely does him justice.  The man has made over one hundred thousand wild wolf sightings.  For example, if someone saw ten wolves as a pack one day, then eight more the next and say on a third that person saw five more  then they could say that they have had twenty-three wolf sightings.  Using that rubric I can estimate that I have made between twenty-five hundred and three thousand wolf sightings.  Quite a few compared to most folks but many people have seen much more than I.

I had optimistically thought that I could depart Gunnison by noon but also concluded that I wanted to do this trip right and was in no haste to depart with loose strings.  Finally sometime after two post meridiem I sat down behind the driver’s wheel and piloted myself westbound down Tomichi Avenue, the wide thoroughfare that doubles as U.S. 50.  Usually I dawdle on my trips but since I had purpose and limited daylight I cruised along at the speed limit first over the numerous small passes the highway uses to avoid the Black Canyon of the Gunnison and then over the flats between Montrose and Grand Junction.  Never at a loss to enjoy topography and landscape, I thought of the many fine hikes that I have enjoyed in the region.  Flying along between Delta and Grand Junction, I glanced west to scan the series of canyons formed by Dominguez Creek and its tributaries.  This area in particular I have found to be a satisfying destination for early season hiking and it occurred to me that I could be stop here, begin hiking and have a very satisfying experience.

Customarily, I ride my bike around town whenever  I can to fulfill whatever is on that day’s task-list.  Even in the middle of Winter, I’d rather ride than drive, and save the atmosphere from pollution.  I swap out my front tire for one with metal studs and worry not about packed snow and icy streets.  Slush can kind of suck the wind out of my sails but a relatively common trip out to the library, a fine ride in the Winter’s Sun for example, can exhilarate the senses.  Thus I made my way to said institution and picked up the copy of The Rise of Wolf 8 that had been placed on hold for me.  My typical habit with any non-fiction book is to read through all the endorsements, maybe the bibliography if there is one, scan the illustrations and maps, read the foreword and introduction – in other words, before I plunge into the text itself I like to get a feel for it.  I don’t often scan through the index unless I have a specific question, but flipping through the book at hand I came to the last entry.  My last name being Zieber I have had a long fascination to see what ends up at the end of the list – to the absurd point that if a book fails to have an entry in the Z’s that I think the author a chump of sorts – so I was in my own way oddly satisfied to see that Rick’s book had one entry under Z.  What caught me off guard was seeing that that entry was my name.  That was unexpected.

Once at Grand Junction I turned east and drove along the Colorado River to the small city of Rifle.  Here I headed north on Colorado 13.  Along the way I had admired the high mesas that towered over the river, the tributaries of which led back to some wild country I’ve never seen.  In other circumstances I would have slowed down and moseyed around a bit, but today I just flew on by.  Wolves were on my mind, and now I wasn’t thinking of political wolves or wolves in any other connection with humanity – I was thinking of wild wolves roaming the landscape.  A pack had been confirmed to be running around northwestern Colorado and I wanted to find them.   From a distance, of course, just to see if I could.  If nothing else, it would be a good prelude to my visit to Yellowstone National Park.

My initial surprise was compounded by the fact that there were two entries by my name.  I cautiously open the book to the pages indicated to see whatever it was about me that had caught Rick’s attention.  It turns out that there was an encounter that my partner, Rob B., and I had seen – encounter here really means a pack battle – between the Druid Peak and Crystal (now Mollie’s) Packs.  Rick had noted our denotation of how the alpha male, Wolf 21, had protected the pack’s pups during the melee.  I remember the encounter well although I hadn’t thought of it in any detail in some number of years.  The most obvious thing I can say is that I was flattered – but that barely hints at the tide of emotion that began to well up in me.  If I think of the metaphor of passion linked to the smoldering ember within my soul then I like to think that at this point it would be as if someone had readied a cup of gasoline.  Nothing had happened yet, just that the potential energy had been made ready.

Somewhere between Rifle and Meeker the light dimmed to night and I drove up a series of back roads to Maybell, noting with concern the accumulated snow.  I could have gone to Craig directly from Meeker but I had intended to car-camp at Brown’s Park.  When I thought about the late hour and uncertain conditions I concluded to drive the additional thirty miles to Craig and secure a motel room.  It’s not what I really wanted to do but didn’t really relish the idea of sleeping on snow with three-season gear.  So, finally arriving at Craig late at night on a Thursday I found town sleepy and pulled into a place that looked better for the price than anything else.  I was tired and happy to be done driving.  The interior was much better than I would have expected and I made a hasty decision to rent the room for three nights.  The total would cost me just slightly more than one night in the place I had made reservations for later in the trip, so I didn’t feel a real economic pinch.

For the time being I’ll end my origin story here, because I’d like to get outside while I still can.  Our community here is being slowly quarantined due to an outbreak of COVID-19 and the future is uncertain.  Until I’m ordered not to, I plan to get out every chance I can. 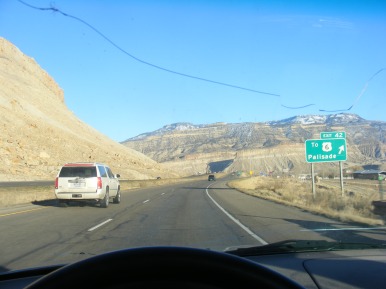 If I wanted to turn back, this would have been the exit off of Interstate 70 I would have used. 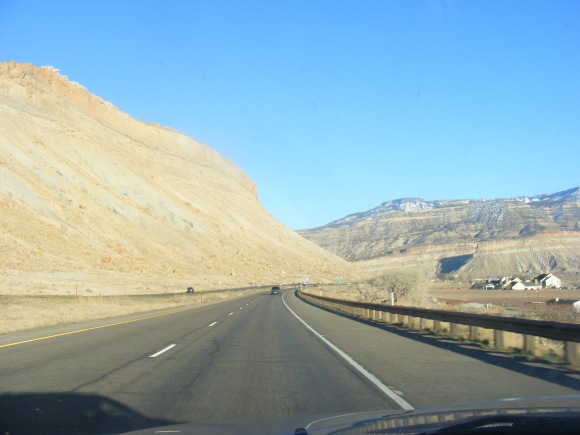